Pregnancy is divided into weeks and into three equal parts called trimesters. Full term pregnancy is considered 40 weeks and an infant delivered before the 37th week completed is considered premature.  Premature infants may have problems with their growth and development, as well as difficulties in breathing and digesting. Pregnancy is counted from the first day of a your last period. This means that at conception, the unborn baby is already considered two weeks old. Also see BabiesDirect month to month diary to learn about the emotional and physical journey of pregnancy.

weighs just over an ounce. The baby’s unique fingerprints are already in place. The muscles lengthen and become organized. Soon you will start feeling the first flutters of the unborn child kicking and moving within.

What Tests will the Doctor Run at this point?

15 weeks -The fetus has an adult’s taste buds and may be able to savor the mother’s meals. The baby’s parchment-thin skin is covered with ultra fine, downy hair that usually disappears before birth. Make sure you refer to our nutrition section as it is VERY important

16 weeks –  The fetus weighs now six ounces and is five and a half inches tall. The baby can grasp with his hands, kick, or even somersault.

17 weeks – The baby’s circulatory system and urinary tract are up and operating. The lungs are inhaling and exhaling amniotic fluid.

18-19 weeks – The fetus is now 5 1/2 inches long and weighs 7 ounces. With and ultrasound you can decide whether or not to find out the sex of your baby if your baby is in a position that reveals the genitals. If female, the vagina, uterus, andFallopian tubes have formed. If male, the genitals are discernable. 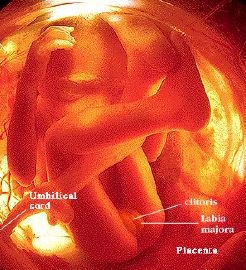 20 weeks – The child can hear and recognize the mother’s voice. This is an important time for sensory development since nerve cells serving each of the senses–taste, smell, hearing, seeing, and touch–are now developing into their specialized area of the brain. Though still small and fragile, the baby is growing rapidly and could possibly survive if born at this stage.

21 weeks-  The fetus is steadily gaining fat to stay warm and has grown a whitish coat of a slick, fatty substance to protect skin in amniotic fluid and to ease delivery.

22 weeks – The fetus is now 7 1/2 inches long and weighs about 3/4 of a pound. The eyebrows and eyelids are fully developed, and the fingernails cover the fingertips. Sounds from a conversation are loud enough to be heard by the fetus in the uterus. If you talk, read, or sing to your baby, it’s reasonable to expect him to be able to hear you.

23 weeks – The fetus is now proportioned like a newborn except he is a thinner version of a newborn baby since its baby fat hasn’t developed yet. The baby weighs about a pound and is 8 inches tall.

24 weeks – The unborn baby is covered with a fine, downy hair and the skin is protected 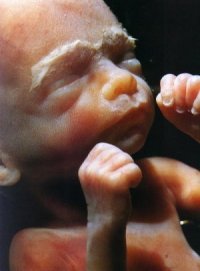 by a waxy substance. Some of this substance may still be on the child’s skin at birth at which time it will be quickly absorbed. The baby practices breathing by inhaling amniotic fluid into developing lungs. Make sure you refer to our nutrition section as it is VERY important!

25 weeks – The fetusweighs over 1 1/4 pounds. It is now pretty well build portion wise even tough it still has little body fat and its skin is thin. The brain is growing rapidly, and the baby is starting to fill the space in your uterus .

26 weeks – The fetus makes breathing movements, but there’s no air in the lungs yet. The fetal brain scan will show response to touch.

27 weeks – The fetus weighs now just over 2 pounds and is about 11 inches long. The baby’s eyes begin to open around this time