The sperm fertilizes the egg (ovum) at the time of ovulation (release of the egg from the ovary), which typically occurs around day 14 of the menstrual cycle. Only one sperm can enter the egg: The male or female sex of the baby is determined at this moment. Once fertilization occurs, the egg/sperm cell, called a zygote, begins to divide into multiple cells that start the development of differing tissues and organs. At this time, the
developing baby is called an embryo. The embryo attaches to the wall of the uterus (womb) about 6days after fertilization.

The mother’s blood supply (identified by the dark red blood vessels) can be seen beginning to surround the embryo; eventually it will connect with vessels the embryo forms to develop the placenta. The embryo
(purple oval structure) is contained within the amniotic cavity and is connected to the yolk sac (brown oval structure) by a narrow yolk stalk. The yolk sac helps deliver nutrients to the embryo and fosters blood vessel development.

ring week 3, there is further development of the mother’s blood supply. The yolk sac has enlarged but is too small to be seen until after Week 20. The primitive development of the embryo can be seen
within the amniotic cavity. At this point, a heart bulge has begun to form (seen on the right end of the embryo), and the brain is beginning to form just above the “heart.”

By the beginning of Week 4, the embryo’s heart produces a large “chest” bulge and begins to pump blood. The embryo’s head is very large compared to the rest of the body. A tail is present that shrinks continuously and is gone within the next 2 to 3 weeks. Also present are the beginnings of the arms; the legs begin to be visible by the end of this week, when the eyes and ears can also be identified. At the end of Week 4, the embryo is less than 1/7 of an inch long.

The changes in the developing embryo are minor during this week. The head continues to enlarge due to the rapid growth of the brain. The arms are shaped like paddles and the legs like flippers. At the end of Week 5, the embryo is still less than half an inch long. 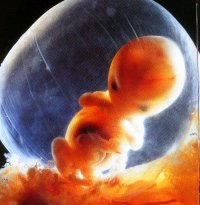 Between Weeks 5 and 8, the embryo begins to take final form. Fingers start to form during Week 6, and the arms and legs develop elbows and knees by the end of Week 8. The early shape of the nose is also distinguishable. The embryo’s sex cannot yet be physically identified. At the end of Week 8, the embryo is just over an inch long. 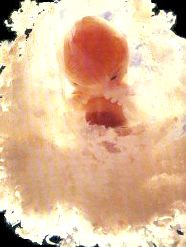 From the beginning of Week 9 onward, the baby is called a fetus instead of an embryo. During Week 9, the sex organs (genitals) develop male or female characteristics, but the sex of the child cannot be determined by ultrasound until several weeks later. All of the organs have begun to form by Week 9; they continue to grow and develop throughout the pregnancy. The fetus now grows rapidly and is almost two and a half inches long by the end of Week 10.

During the second and third trimester, all of the major body organs continue to develop until birth. The expected date of delivery is 38 weeks after fertilization or 40 weeks after the last menstrual period. The factors that trigger labor are not completely understood, but several body hormones are associated with the start of contractions. The first stage of labor is the dilation of the cervix, followed by delivery of the baby and then the placenta (after-birth), some 15 minutes later.