A Cesarean section – also called a C-section – allows safe and quick deliver of a baby when a vaginal delivery is not possible. In a C-section, the doctor makes a cut in the lower belly and into the uterus. The baby is delivered through this incision. After the procedure, it will take about 4 weeks for you to feel like your old self.

There are many reasons for doing a C-section: The baby may be in the wrong position, the baby’s head may be too large to pass through the birth canal, your contractions may not be strong enough to deliver the baby, or you may have had a C-section before.

In 1984, Cesarean section, often called a C-section, in which the baby is taken from the womb through an abdominal incision, became the most common operation in the United States. In fact, nearly one out of every four babies in this country – a full 23.5 percent – is delivered via C-section. Critics claim that C-sections as one of the most over-performed procedures in the country, needlessly risky to the mother and providing no clear without benefit to the baby. But the fact is a Cesarean is called for when a vaginal delivery is thought to be dangerous for either mother or child. The mother is typically awake during a Cesarean, which is usually performed under regional anesthetic (such as an epidural) injected into the spine. The baby’s father can usually remain at her side. From first incision to delivery usually takes five to 10 minutes; closing the cut takes about 45 minutes. Women may feel greater physical discomfort after a Cesarean birth than after a

vaginal birth and should refrain from strenuous activity for several weeks. 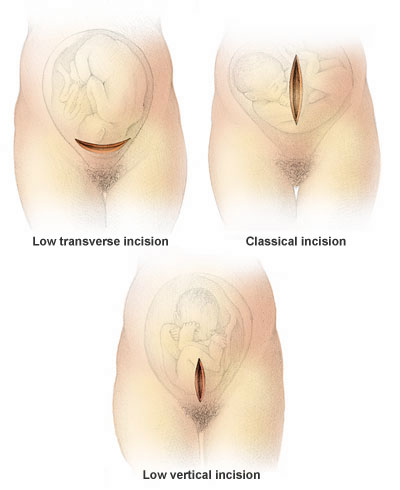 How Can You Know if a Cesarean is Really Necessary?

Here’s a look at the most common reasons for Cesarean sections:

1. A previous Cesarean delivery. At 36 percent, repeat Cesareans are still the number one reason for Cesarean delivery. Up until very recently, doctors feared that the uterus of a woman who had a Cesarean would rupture during a subsequent vaginal labor. But the risk of that happening is actually very small, especially in the case of a low horizontal incision (see illustration). The good news: Many doctors now support Vaginal Birth After Cesarean (VBAC) if the mother and baby have no medical problems.

2. Dystocia-When the baby’s head is too big to pass through your pelvis or when labor does not progress. To help contractions along, try the relaxation methods you learned in your childbirth education classes and experiment with different birthing positions. Some physicians will try to give sluggish contractions a boost with oxytocin (a drug used to initiate or speed up labor) before resorting to a Cesarean.

3. Breech birth-When the baby’s feet or bottom appear first. The usual position of engagement is head-down. Many breech babies turn around by themselves; exercises may help. A caregiver may try to turn the baby before delivery starts. Although some caregivers will deliver a breech baby vaginally, most breech babies are delivered by C-section.

4. Fetal stress. This can occur if the baby is not getting enough oxygen. Possible signs of fetal stress: a change in the baby’s heart rate or a meconium stain, which occurs when the baby has a bowel movement in utero, turning the fluid around the baby from clear to green, yellow or brown. Your caregiver may want to monitor the baby more closely through internal electronic monitoring or take a fetal blood sample to determine the need for a Cesarean.

5. Maternal medical problems. Premature labor or a condition such as high blood pressure or diabetes may make a vaginal birth too risky to attempt.

Why Have C-Section Rates Increased So Dramatically?

National Statistics As the charts below show, after almost two decades of steady growth, the national C-section rate appears to be dropping. At the same time, the number of Vaginal Births After Cesarean (VBACs) is steadily rising.

What is a VBAC?

Vaginal Birth After Cesarean involves a trial of labor which can result in either a vaginal birth or another C-section.

In 1988, ACOG issued guidelines in an attempt to curtail routine repeat C-sections. The guidelines advise doctors to give women who have previously given birth by C-section the opportunity to let labor progress naturally. In 1990, 20 percent of women who previously had a Cesarean gave birth vaginally. That’s up from 13 percent in 1988 and less than 4 percent in 1980.

What are the advantages of a VBAC?

1. Less risk. A vaginal birth usually results in fewer medical problems for both the mother and the baby than Cesarean .
2. Shorter recovery. Because there’s no surgery from which to recuperate, a woman generally feels better and can resume her everyday activities sooner after a vaginal delivery.
3. More involvement. Many women want to be actively involved in childbirth and a vaginal delivery allows for greater participation.

Are You a Candidate for VBAC?

There are a number of issues caregivers must consider when deciding if a woman can have a VBAC. Key factors that make a VBAC attempt possible:

What to Ask Your Doctor About C-Sections

Things to remember after you leave the hospital: